When I was a nipper, I had a guinea-pig called Guinness (he had a black body and white head). Each summer morning, he would be placed in a wooden frame in our garden, where he would happily while away the long sunny hours blissfully chewing his way through grasses, plantains, dandelions and daisies. The following day the frame would be moved to a fresh patch of lawn and he would once again munch to his heart’s content. By the end of a fortnight of eat-squeak-repeat the whole lawn had been grazed and the process could start again. Just as importantly to me, who would rather be in the park playing cricket or in the woods building dens than doing chores, the lawnmower remained idle in the potting shed. I was happy with the arrangement, my mum was happy with the outcome, and Guinness was more than happy in his labours.

Jump forward almost five decades and I now find myself with 814 hectares of Edinburgh grass to mow each summer fortnight … enough grass to cover some 1200 or so football pitches. It turns out that mechanical grass cutters, either pulled by tractor, directly driven or pushed by gardeners, have proven to be a more effective solution than a roving herd of guinea-pigs. But they too have their downsides. They are expensive to buy and run, burn tonnes of climate-change inducing carbon, are frequently prone to break-down and damage, and take up the time of skilled gardeners who could otherwise be engaged in managing shrub beds, hedgerows, trees and wildflower meadows if they did not have to spend most of their time simply cutting grass. So now we are looking at the modern equivalent of the guinea-pig … the Mowbot! 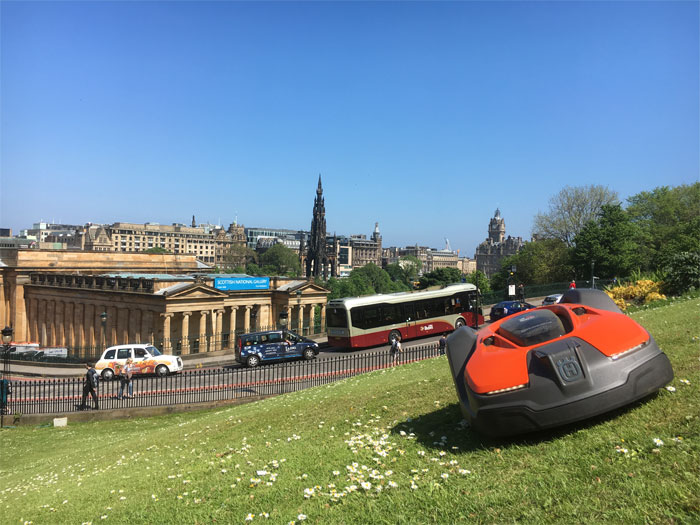 A mowbot in action on the Mound, Edinburgh

These tireless fellows have been wowing the Edinburgh crowds each summer since 2017, when they started “grazing” some of our more challenging lawns. “Monty” has the prime spot atop The Mound, where he performs for the city’s Festival-going crowds; circling this steep, often wet, slope far more safely than was the case when a gardener had to do the job with a mower-on-a-rope.

“Marvin” has a much easier role on the level lawn of Princes Street Gardens, the only impediment to his task being the selfie-taking tourists who find it entertaining to stand in his way and occasionally try and take a ride. Poor Marvin even got kidnapped once; but was quickly relocated due to his theft-alarm and GPS-tracker.

“Tom and Jerry” had an even more hazardous introduction to human curiosity when placed on the playing fields of Longstone Primary School. The children tried to stop their progress with sticks-n-stones, and shoes and jumpers; but because the two mowbots can sense physical obstacles in their path they simply turn around and go another way. Eventually the kids got bored and now Tom and Jerry have free-reign to get on with cutting the grass for football and rounders, outdoor learning, playtime and sports-day.

“Murphy” has probably had the easiest time to date. Located in Mortonhall cemetery brings relatively few trials and disturbances. If anything, her quiet, serene progress only complements the general air of respect, and is a far more fitting way to cut grass than the noisy petrol mowers used previously. The cemetery gardeners can now dedicate far more time to caring for the garden of remembrance and many flower beds that dot this place of rest.

All five emission-free mowbots have self-charging docking stations, can cut 5000m2 of grass for up to 16 hrs per day or night, leave no grass clippings to rake up, immediately make themselves “safe” if tampered with, and are controlled and monitored via a smartphone app. Any operational issues are immediately flagged up to the smartphone operator, and if removed from site can be readily tracked by GPS. In fact, some have even helped the police identify and charge persistent thieves!

So, Monty and his chums are here to stay in Edinburgh. Indeed, as mowbot abilities improve every year they will be joined by others. It will not be long before their range will increase to 20,000m2, they will be solar-powered, and eventually may even be able to fly from one park to another. Not as cute and cuddly as guinea-pigs I guess, but little bundles of technical performance in their own right. 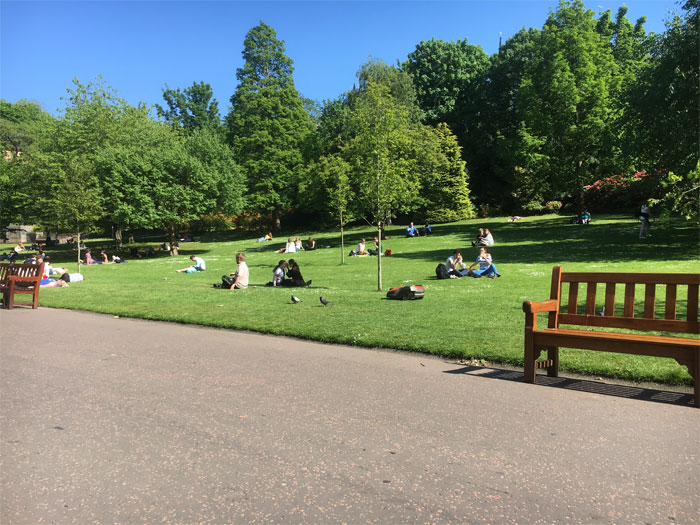